The island of Vulcano is named after the Roman god Vulcanus; its activity is in state of dormancy, but it is possible to observe some phenomena called “fumarole” , thermal and mud springs which attest its state of activity. In Roman mythology the island of Vulcano is considered the place where the Hephaestus workshops’, god of Fire, were situated. For those who cannot give up a naturalistic excursion, the visit of the Great Crater is a must. The path leading to the peak is situated about 5 minutes on foot from Levante harbour, the principal port of the island. The excursion is not demanding, it does not need particular equipment or preparation, and is suitable for everyone. 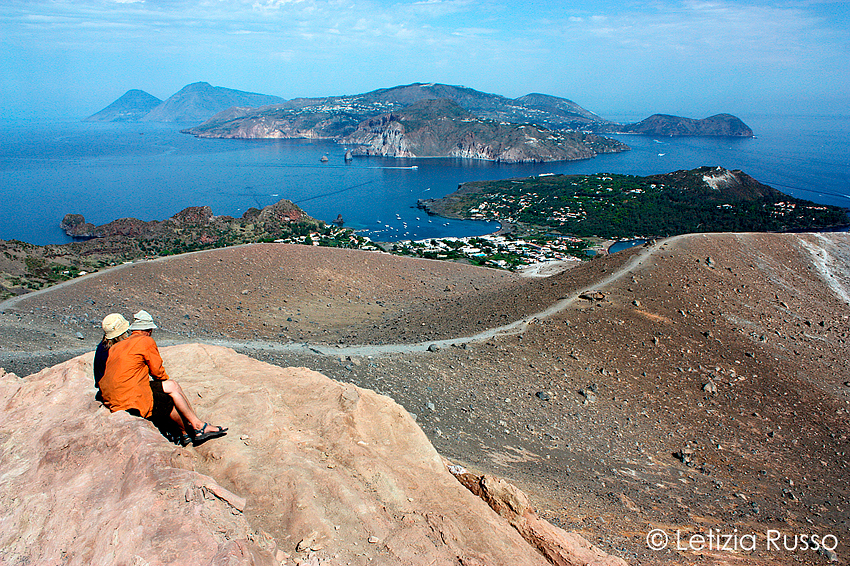 The Path of the Great Crater

The access to the volcanoes, making part of the commune of Lipari, is bound to the payment of a little toll. In case of Vulcano the toll could be directly paid at the beginning of the path; near the ticket-office there is a small kiosk, good for those absent-minded who forgot to bring drinks. The path towards the peak is a pleasant walk of 45 minutes between brooms, volcanic boulders, and black and sandy soil, mostly compound of volcanic dust.

One of the principal reasons to reach the Great Crater is surely the view. As further you climb you can admire Alicudi, Filicudi, and Salina, but it is only when you reach the peak that you completely appreciate the charm of this archipelago. It will be possible to distinguish the shapes of all the seven isles and the peninsula of Vulcanello. The Great Crater of Vulcano is the only place where it is possible to admire the whole archipelago in a unique glance; turning around towards south, on the contrary, it is possible to admire the northern coast of Sicily, and Etna. Some of the most evocative photos of the archipelago derive from this place. Once reached the peak we move towards the discovery of the crater, a depression of wide dimensions of a diameter of around 500 meters. One of the particularities are the “fumarole”, the unique manifestations visible after the last eruption occurred in 1890.

The fumarole are mostly compound of sulphur, whose bacterial action is the cause of a yellow-ochre and red coloured patina, which covers the soil and the stones making part of it. While getting closer to them, be attentive; if you chose a guided tour, you will be asked to put on a supplied mask; on the contrary, bring a handkerchief with you, in order to put it upon your nose or mouth, because of sulphuric gas.

The descent occurs on the same path.