Excursions on the crater 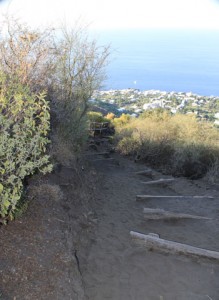 The repeated and constant eruptions are always accompanied by the emission of bombs and lapilli that during the night to create a real fireworks show. The observation from Pizzo the top is a unique and exciting experience where many explosions change in both intensity and type. The phenomenon is relatively safe to watch at the observation point from Pizzo over the pit. The volcano of Stromboli, well known already for its continuous eruptive activity, apparently calm hides in its depths a constant whirlwind. The volcanic activity in 2002 led to the collapse of part of the Sciara del Fuoco with the resulting in a seaquake banned the climb to the crater for two years. In 2005 with a new regulation and reorganization of the trails excursions began again. Access, once totally unristricted, today it is only when below 400 m, exceeding this quota requires one to be accompanied by volcanic or alpine guides. The network of paths leading to 900 m were projected by the regional forest and the Civil Defence, who designed and created safer and easier paths. The hike to the volcano does not allow more than eighty people on the crater, and the guide is to inform the police station providing a list of vistors, the location, time of departure and return. Compliance to simple precautions can avoid unpleasant accidents, the approach to the mouths to photograph or film never justifies the risk. Stromboli volcano like all others is subject to unpredictable variations in intensity that can affect the entire summit area. The release of eruptive material can be blocks weighing up to 10 kilograms and be lethal to anyone struck by such, which is why one should pay attention to the giudes instructions and never stray from the paths. The climb to the volcano presents considerable difficulties, especially at night so it is recommended to be accompanied by tour guides who are familiar with the trails and who are currently updated on the eruptive activity. An experienced guide will help durring the climb and will also show you the natural beautys of the area and make sure of your safety for watching the “fireworks”.

There are several paths through the island: 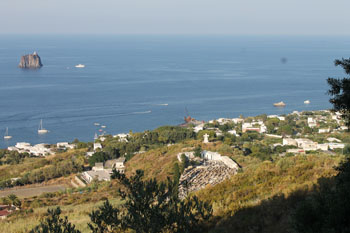 The path of the cemeteries, this route, starting from Piazza San Vincenzo is by far the easiest and is also suitable for children and the elderly and there is no need for an escort. The trail begins by taking the path that leads from Via. Soldato Francesco Natoli to the geological station, from here, having left the main road, you get onto fascinating path surrounded by mediterranean vegetation. The path leads to the old cemetery that has been recoverd in recent years. Dating to the begining of the century, it contains the graves where ceramics typical of the place can be seen. The descent continues to the new cemetery, where a long staircase takes you back to the main road.

Trail from Piazza San Vincenzo to the Sciara del Fuoco 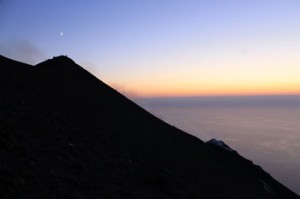 This track, designed for easy walks leads from San Vincenzo to Punta Lambronzo which rises to an altitude of 400 meters horizontally along the mountain. The path, one and a half meters wide, From about 200 to 250 m the ground is sandy and rocky, the sandy part of the walk is terreced making it easier to complete. To make the trip more pleasant areas were built equipped with wooden tables and benches for resting.  The begining of the trail is on the road that runs alongside the church of San Vincenzo until you reach the old cemetery at 125 m where the well recognized Strombolicchio is visible; from here a path leads to an old oak tree where his shadow was made a small little square where you can admire the town center of San Vincenzo. Leaving the square you will continue the climb through a grove of oaks that will take you to the rocky ridge overlooking Cannestrà towards the west. The point offers a unique view of the village of San Vincenzo and Piscità. The path continues along a ground of black lava that reaches an altitude of 250 m, leading to an equiped resting area before the junction of the paths to the crater. The walk continues towards the west and leads to Vallonazzo, where you can appreciate the grandiosity of the gully. The crossing in this part is a descent of 40 m and a rise of 20 m on the opposite side of the trail that connects to a path in stone at an altitude of 230 m. The trail was designed to make the volcano known while minimizing exposure to hazards, the area that presents the greatest risk is Vallonazzo, where it is advisable to pass through without stopping. The few sections that run along the cliffs are marked by wooden railings, however it is maxium attention is recommended in particular in case in the change of weather.

Trail from San Vincenzo to Pizzo (above the pit)

The trail, built from scratch in 2004, allows you to reqach the north-east summit. This route is traditionally recognized as the safest way to reach the summit. The path leading to the crater has an average width of one meter, it is well marked and easily traveled, the ground alternating from sandy to rocky.  The first part of the climb to crater follows the path from the San Vincenzo chruch to Labronzo, from here the flat natural trail is left to the right to begin the upward path on the laft. . The area covered by bushes of cistus, goes through the classic stone walls made for agricultural purposes. At an altitude of 340 m in the vicinity of an oak tree there is a resting area from which the climb continues to the summit of the rocky ridge called Cannestrà at 500 m. Past this ponti there are is no shade during the summer and the hike can become somewhat tiring, so it is recommended to hike in the late afternoon and then one can also also fully enjoy the spectacular night view of volcanic activity. The climb along the ridge on the Liscione is characterised by lava of brick red color, has been simplified with the creation of numerous corners, covered by black sand and rocks, throughout the journey you will be accompanied by the sight of Stromboli and the Strombolicchio. Reaching the ridge which separates the Sciara del Fuoco at the eastern side is an exciting time, you’re face to face with the smoking craters, at this point it is important to choose the suitable place to stop and admire the volcanic activity because of the winds that move the fumes of sulfur dioxide.The descent can be made using two different paths other than that of the climb. The most conventional is on the south-east from Pizzo to Pontella delle Croci from which, even at a quick pace you can walk along the sandy area of​Rina Grande (one of the trickiest paths, having been covered by an avalanche of hot material during the eruption of 1944) until Liscione. This point is also known as the “shoe cleaner” due to the habit of emptying ones shoes of the sand collected in the descent. From this point onwards, the descent continues on a steeper slope until reaching the concrete road. The path is not considered highly difficult but is always good to pay considerable attention, a few points near the cliffs are not equipped with protective railings.

The track from Ginostra can reach an altitude of 800 m, along the western edge of the Sciara del Fuoco to lead to Pizzo, the peak, where the spectacular eruptions are it’s owner. The well marked out route, starts from the terrace before the church of Ginostra, and continues along a steep trail and through the urban area, where the Aeolian architecture, the stone walls of lava stone and crops of capers, olives and prickly pears will provide as the backdrop. At an altitude of 50 m, the left fork takes you up lava stone steps to 120 m altitude, where a sign indicates the beginning of the trail called Piano di Vigna. The trail leads to Punta Corci where you begin to walk along the Sciara del Fuoco, which has very specific morphological characteristics of marine erosion, you will be suprised by the unusual boulders that cover the entire Sciara that break between the waves. From Punta dei Corvi, on a bed of gravel and volcanic material, the trail climbs steeply through dry walls built for the cultivation of capers and bushes of broom and cistus. Once in Portella Ginostra you can admire the eruptive activity of the southwest crater . It ‘s not recommended reutrn by the same path because of the steep slopes and unstable ground, one should instead go to Portella delle Croci where a well-trodden path leads you to Stromboli to then return by sea to Ginostra.