Who considers that the Aeolian Islands are amazing, charming and magic only for their appearance, is wrong! In their bowels, in the restless depth of marine flowing, between the rocky fissures, holding up the earth, and being enveloped by wonderful sea water, amazing worlds are hidden! We bring you, thanks to words and images, into the depths of the sea, into those majestic seabed which receive the beauty, and leave anyone charmed.

In Lipari, plunging into the village’s dry point, it is possible to admire, from the maximum depth of 23mt, a various gamma of the colours, and fishes. In this point, the immersions are suitable for everybody; even amateur skin-divers are able to enjoy this amazing marine fauna. Immersions’ level is of low difficulty . It is necessary to anchor in the cove. Six meters away you can dive in a sandy seabed. The immersion gradually goes on towards a seabed full of stones, which produce ravines and walls, showing wonderful colours; in these elegant corridors octopus, groupers and morays move. In the maximum depth you can admire the view of fins nobilis.

The Punta Castagna immersion has some limits, if compared to the village’s dry. Attention, no limits of beauty! The immersions in this place are recommended only to expert skin-divers, and they advise not to go over 40 meters; the difficulty is high. It is a hard law of life, and sometimes, something of difficult to be reached, appears more charming and magic. The immersions in this point go beyond every imagination, and great charm. The seabed is characterized by the presence of canyons covered with the whitest pumice. This scenery appears magnificent in its particular mix of colours, light plays, and shadows. It is possible to anchor 9 meters further. The blue colour of the seabed opens the descent towards spirographs, which seem to deputize Dante’s Beatrice, leading to a part of paradise! You do not meet the blessed souls , but real, concrete, tangible beauties. This seabed shows us, at 36mt, anthias’s clouds, and red gorgonians. Between these clouds of anthias there are not the angels to move, but wonderful lobsters, groupers and elegant barracuda. What we see in the surface is only the smallest part of what is hidden in the heart of depths. We are not talking about the Freudian mechanism, or about the famous Iceberg of Titanic, but almost about a huge stone emerging from the Lipari’s seabed. We are introducing the immersion of the bath stone, requiring a long preparation, considering a highest degree of difficulty. The maximum reachable depth is of 36meters. Once reached our “extreme point of the iceberg”, you have to moor on the southern side, where the seabed rises up to 14mt, to go on then its descent up to 36mt, its maximum depth, where our “iceberg’s point” offers the scenery of cubic rocks. You are not admiring a Picasso’s painting! These are the imperfect, but such wonderful geometries of the nature! These rocky stones are collocated one upon another at the foot of the majestic stone. They are embellished by the mantles of starfishes, marine sponges, spirographs, and gorgonians. This is the real pardise for groupers. The amazing seabed is also the place where to meet amberjacks, octopus, and morays.

The immersions are not suitable only for the heroes of the seabed. Of the medium difficulty, up to 30mt of depth, la Secca delle Formiche provides an amazing scenery of a rocky formation, which arises from a purely sandy seabed of 30mt.

Jointly, these rocks give the idea of an inverted cone. The docking has to be done on the top of the shallow, a clearly visible point, thanks to its crystalline waters. The scenery offers the passage of some parrotfish, too.

Wherever you go, the eyes catch unique images, which make us feel as a part of nature, in a perfect harmony with the environment. Crystalline waters of Lipari also accept less skilful skin- divers. The immersion, named so by the boulders characterizing the seabed, Le Formiche di Lipari, does not present particular difficulties, and allows us to admire a seabed, which varies between 13 and 28 mt. These boulders, stacked one upon another, create suggestive natural tunnels, where you can meet octopus and groupers. The tunnels are enriched by the presence of asteroids. At this point it is enough to rise your eyes upward, to meet shoals of small fishes. It is really between the sky, the earth, the water and the depth, that man has the honour to feel indeed a part of a perfect totality, going beyond apparent spaces.

The evocative scenery, unfortunately for a few, is offered by the immersion known as “panettoni di pietra menalda”. The immersion is almost tricky, and is suitable only for expert skin-divers. The maximum depth is 49mt, and bottom times are indeed reduced. The scenery shows the wonderful pentagon starfishes, melon hedgehogs, and pink gorgonians. 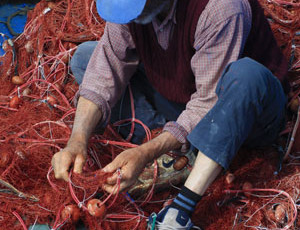